These were great. But I turned mine into Rum Raisin cookies. I put the two cups of raisins in a saucepan with one cup water and a half cup of Captain Morgan's spiced rum. I brought it to a hard boil, and then turned down the heat and simmered it until all the fluid was absorbed. It took about thirty minutes. After the cookies were baked and cooled, I drizzled a glaze over them that was just powdered sugar and Captain Morgan. Everybody says they're one of the best cookies I've made. And I've made a lot of cookies. 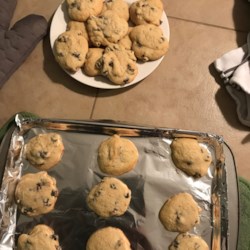