I think this recipe had lots of potential but I really had to modify it to make it a five star. I used 2 bananas (really ripe) I used only 1/4 cup sugar (actually I used Splenda) and left the brown sugar at 1/2 cup. I used 2 whole eggs instead of just the whites. I only used 1 cup flour and used 2 cups of oats. I used 1 1/2 tsp baking soda. I added 1 tsp cinnamon and 1 tsp vanilla. I omitted the raisins. I baked mine at 350 for 9 minutes (using about 1 heaping TBSP of batter per cookie and flattening slightly). This higher heat/less time made the outside nice and crispy but the center was melt in your mouth! I think next time I would also add some chocolate chips. 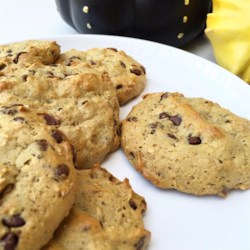