I was not wowed by these. I followed the directions to a T, except for adding fresh garlic and chopped sundried tomatoes to the spinach filling after reading some reviews about how it was bland, and still found the whole dish somehow salty AND bland at the same time. The filling was good after my changes, but the finished dish once I poured the sauce on was not what I was expecting for such a well-reviewed recipe. I used Newman's Own All Natural Alfredo Sauce, so perhaps it was the brand? Either way, the only way I'd make this again would be if I used marinara instead of alfredo. Thanks anyhow! 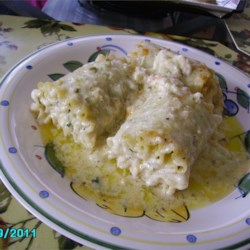