I thought this turned out rather well, and I did mess up. I baked at 350, not 300. Perhaps the recipe submitter's oven runs hot or she has a convection oven. bc 300 would never work in my oven! I baked for 40 minutes, and it wasn't done, so I meant to add another 20 mins on the timer. I somehow forgot to set it or something, bc some time later I realized I hadn't heard the timer in at least a half hour, maybe 40 mins and ran to check on the cake. Weirdly, it was fine. Perfectly baked--maybe a tad dry, but hey, whatever--and not burned at all. I thought it turned out well. Bf didn't comment on the cardamom--and believe me, he would have if it was too much for him; he has before!--and I thought it was a perfect amount. His only comment was that his first bite of apple was a tad sour--I guess one apple piece was a bit much, but the rest were fine. So my only advice would be to 1. Remember to set the timer! You might not be lucky like I was and 2. Make sure your apples are sweet, not sour. Thanks for the recipe! A nice, almost coffee type cake. :o) 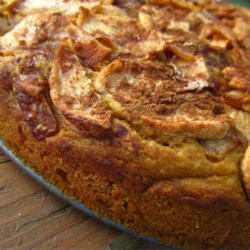