This recipe was AWESOME. It was so good that my husband went back to the leftovers just 1.5 hours after dinner! I did make some minor changes based on what I had in the house (parm instead of romano like the other reviewers), but the big change I made was to use kale instead of spinach. I would definitely recommend the kale -- its not as wilty as spinach, holds up better in leftovers, and adds a nice different bit of texture to the dish. Also, I did keep the amount of meat recommended in the recipe, and would definitely do both the sausage and ground beef. It's meaty, but oh so good (and I'm not a huge meat person)! 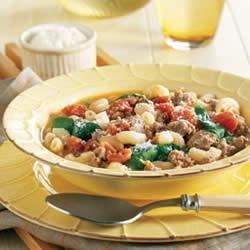