This was good, but the beer flavor was not quite as strong as I'd hoped. Next time, I will try a stronger beer, like Guiness, and cook it on the stove for a longer time to really give it time to simmer and for the flavors to soak in. I pricked the brats all over with a fork to allow the beer to get in there. Some of it could be the beer... all I had was Beck's, which is pretty light. Great idea, though, I will keep tweaking to get more beer flavor. I used a couple cloves of fresh garlic instead of the garlic powder. 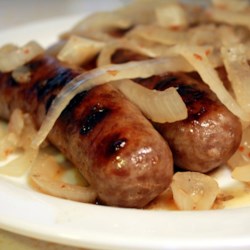