I found that you can cut the bacon in thirds instead of half. Cutting the sauce recipe in half works too. I marinated the water chestnuts for a 1/2 before wrapping them in the bacon. It gave them more flavor. Then i used the marinade to baste them before cooking. Draining the fat off during cooking time helped alot too. 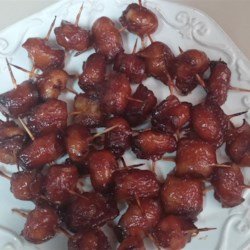