Great recipe! I made this exactly as stated in the recipe, using Chex Multigrain cereal, almonds and pecans. I left the nuts whole, and toasted them in the oven first. I saw several 'bad' reviews, and I believe most of them complained about stickiness of the finished product. These same reviewers stated that they 'had' to increase the cook time for the coating in the microwave to get it to the hard crack stage. That's their mistake right there! Like the recipe says, you just put it in the microwave until the butter melts! Stir it and pour it over your cereal mixture. I couldn't find my roaster so I used 2-9x13 cake pans, then dumped it on sheets of quick release foil and spread it out. It took almost no time to cool and didn't have to be stirred. Next time I'm going to try adding some cinnamon and vanilla as others suggested. Great recipe, Trish! 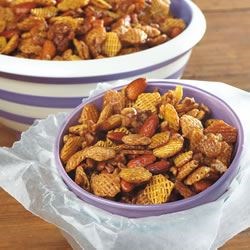