Just made this for a party tomorrow. I wasn't sure I'd like it but it's really good. I doubled (somewhat) the recipe. I used 2 cups sour cream, 1 cup mayo, 2+lbs real bacon pieces (hormel) and dashed in a good amount of garlic pepper. I tested it with plain & roasted garlic pita chips since that's what I plan to take along to go with it and all I can say is YUM, and I haven't even added the tomatoes yet. Hope it's a hit tomorrow. I'll update once I know :D Updated: This was the one recipe that had requests from at least 7 people at the party. I gave it to one person and saw them making copies on the scanner and handing them out to lots of people so I don't know how many actually took it home :D Everyone kept asking "who made the great dip with the tomatoes & bacon in it?" I doubled the recipe and not a bite was left. I actually saw one lady scraping the dish with a pita chip! Just wanted to add one tip: When I use real bacon pieces I put them in a dish and microwave them a few seconds to warm them just slightly. It helps bring out the bacon flavor like you would get with fresh cooked bacon. It's almost as good this way and much less messy! 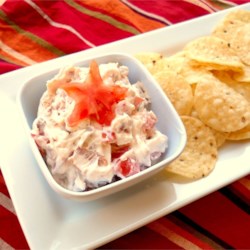