I made this for recipe group. I tripled the recipe and marinaded 2 pork loin roast for 4 hours then grilled them. I made the recipe as directed but halfed the chile powder because hubby isn't a fan of heat. I must state that I was not very impressed, good lime flavour but not much else. No hint of the teriyaki and I feel that this recipe would be out of balance even with the extra chile powder because heat and acid don't balance well without sweet or creamy (oil)... The taste was very acidic and I countered that by reducing the marinade after removing the meat and straining out the other bits.. I added honey, a lot of honey and served it along side the meat. I probably won't make this again because other recipe serve me better.. Lots of lime, maybe some heat, if that punches your buttons carry on.. 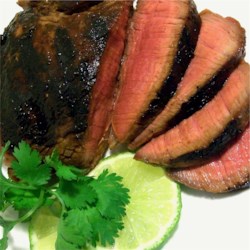