This was a great recipe. I did make some modifications. I ommited the chevril. I also used closer to a cup and a half of olive oil. I used wheat pita pockets, and they just really soaked up the olive oil. I baked for 5 minutes and they came out perfect! **Update** I made these again, and I used less olive oil because instead of cutting the pita pockets into triangles and then brushing them with the olive oil mixture, I only cut them in half, and then I brushed them. After each was covered I cut into triangles. This was SOOO much easier and less time consuming! 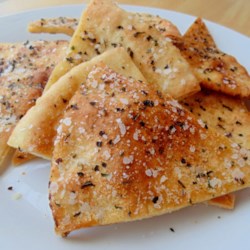