I cannot rate this higher than four due to the HUGE discrepency in cooking time. It said take it to 145, about one hour. It took me almost two hours to get it to 145, and I do not eat pork that is only cooked to 145. The FDA recommends 170, and my programmable thermometer says 160. It took 2 1/2 hours to get it to 160, and it was still lightly pink inside. But the recipe is great! The glaze was tasty, and thickened with corn starch it was a GREAT sauce to top slices of this roast with. Next time, I will figure on approaching three hours to get it to 170 internal to get rid of the pink. I just don't like pink meat! Chicken, also, I always cook longer than the recipe calls for. Mine was NOT dry, though; the initial browning all over and then the basting every ten minutes kept the inside nice and moist. I used a 3 lb half of a Boston Butt roast for this, and marinated it for 24 hours. Definite keeper - I will make this one again!! 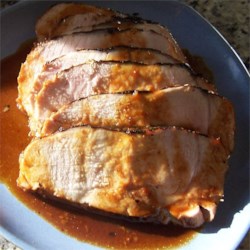