The flavors in this recipe are very, very good, but it's not what I would call a stew. The only change I made to the recipe was substituting a can of chicken broth for some water (I still used 3 cups of liquid) and it came out more like a thick sauce you would eat over rice than something eaten from a bowl. In fact, with the exception of the chorizo this had very strong Indian flavors. It was tasty enough that I'll make it again; the only reason for four stars instead of five is that the "stew" implies it's a meal in itself, whereas it really needs a little something to go with it. Next time I'll serve it over Basmati rice. 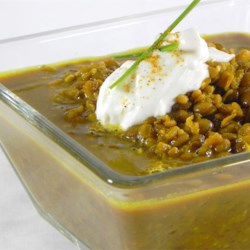