Not bad - it does make the meat very tender if you marinate it at least overnight, and most people will surely not find fault with honey and soy sauce. That being said, know that the dominant flavors are going to be very Asian tasting: soy & honey, creating what amounts to a sweet and slightly teriaki flavored soy sauce marinade. The vinegar helps tenderize the relatively tough cut used. I personally added 1 tsp. liquid smoke and some coarse-ground black pepper (to taste). This really should not be called "barbequed" flank steak, however, since (for one thing) there is absolutely no smoke preparation nor any BBQ 'flavor' involved whatsoever. The most prominent taste is clearly soy sauce, and the meat leans very strongly towards an Asian flair (not that there's anything wrong with that - in fact, I'd even add some ginger root or powder next time to kick it up in that direction). This would really be best for thinly-cut (1/2 inch) flank steak, to be pan-fried quickly and sliced over white rice or noodles, maybe with some green onions, water chestnuts, and so on. For the purist, or those looking for a traditional or truly "london broil" type preparation (or styled marinade), this probably isn't what you're looking for. 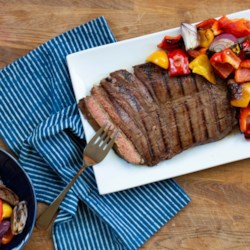