Could phyllo cups be used as well? I picture the filling within the cup, baked and topped grated cheese and fresh dill.. thoughts anyone? **Update** So i made this appetizer and it was sooo yummy. The only thing I would change in the recipe is to reduce the salt some. I used half and half instead as I ran out of milk, and used red bell pepper rather than green, for mor color variation. I also used the frozen phyllo cups and topped with parmesan... beautiful and much easier that working with phyllo sheets. This will be a keeper! As many suggested, this also makes a great pasta dish and/or dip. 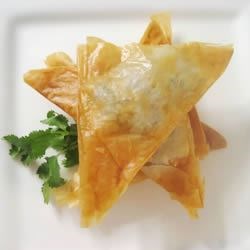