I loved this recipe. I did make some changes, however, because my boyfriend and his family aren't much for leafy greens. Instead of bok choy, I cooked asparagus, so the green color could still be on the plate and have a nice vegetable, but not the leafy texture. I also did veto the mushrooms because I'm not a fan, but still think they would have been excellent, even with the asparagus. As for the jalapeno, I was not sure if I should include the seeds or not. I didn't because I was afraid it would be too hot and I think it turned out lovely. I also kept the blueberry sauce on low for the entire time I was cooking for the thick consistency. The potatoes are great, but I recommend replacing two tablespoons of the olive oil with butter and cooking them at 350 instead of 375. They will burn less and taste better. Overall this a great recipe that has lots of rooms to play with. I have made it two time now and it just keeps turning out better the more I try it. My biggest tip is to be very careful to not overcook the duck if you did not buy it from the store. Wild game can get very tough when overcooked. I belong to a hunting family, so if you do not, it's not something everyone knows. But again, great recipe. If you think it sounds weird, like my boyfriend did at first, don't fret. This is now his favorite way to eat duck and requests it every time he shoots one. Hope this helped! 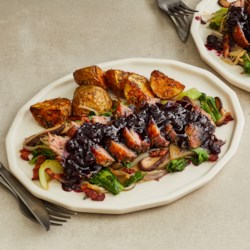