I had ladies from Relief Society and served a salad bar/dessert menu. This salad was on it, mostly because it elminates the need for several different bottles of dressing. There's some magic that goes on between the frozen peas and the other veggies because you've never had a salad come out so crisp. For extra color and flavor I add a shredded carrot layer, a sliced radish layer, and as always, a chopped celery layer. Once in a while I also add sliced water chestnuts.I used light mayo and added about 1/4 of an envelope of Ranch mix to the dressing. I believe it works out better to put the egg and bacon on top of the dressing rather than under. Also I used half the cheese and that seemed like plenty. 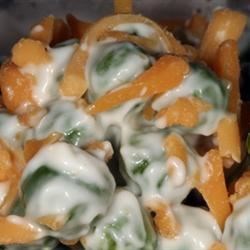