I somehow missed the reviews before making this and I wish I hadn't. Thank goodness I jotted down the ingredients wrong and only bought 1 package of rice noodles instead of the 2 it called for because there wasn't even enough sauce to cover the one package. I hate it when people change up all kinds of things and then give a recipe a poor rating but my 2 minimal changes were in favor to my tastes and only improved it for me and is nothing personal against the original. I love me some shrooms but shiitake are pricey here right now, they are hard to come by, AND they are probably my least favorite out of all the mushrooms I have tried. With that being said, I used straw mushrooms. My other change was that I replaced 3 of the dried red chile peppers with 3 ripe red fresh jalapenos for the flavor and crunch of it. I agree with the majority of the other reviews and felt it lacked flavor in the end. I love all of the individual ingredients but something was missing. I added rice vinegar and more heat to mine and that wasn't it. I added more soy to hubbys and that wasn't it. I even tried to turn the leftover into a soup and added more seasoning/sesame oil but the lack of came through in that as well. It is a good concept and makes a very pretty dish but I think it needs too much tweaking for me to attempt again. 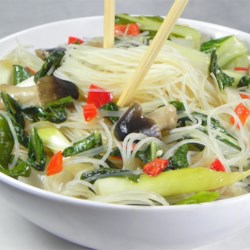