This is seriously good food and very easy to prepare (can't imagine that it would take anyone 20 minutes to prep - more like five)! Taking the advice of other reviewers, I reduced the sugar by one tablespoon and used only one teaspoon of kosher salt. I was probably a tablespoon shy of 1/3 cup on the vinegar, too. Had no ground cloves, so threw 3-4 whole cloves in. The result was addictive! Didn't want to quit eating it! I was skeptical of the extended cooking time, but having tried it after about 45 minutes, there's no question it is much better later. The apple (I peeled mine) basically disappeared during the cooking process, so next time I might just use applesauce to make the prep even faster. This makes a great side dish for turkey, as a less-sweet substitute for cranberry sauce. I added cold leftovers of it to a turkey sandwich - yum! It would also be delicious served with roast chicken or duck, grilled or steamed bratwurst, kielbasa, baked ham. Recommend doubling the recipe. Leftovers can be used cold on turkey or ham sandwiches and take well to reheating. 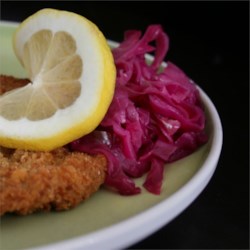