GREAT!! The recipe is very similar to the one that one was given to me. I add several sprigs of fresh cilantro to the broth in which the pork is simmering. Also at the end, break apart the pork into large chunks and place in a pan with some of the broth and bake at 400 degrees for 15-20 minutes or until most of the liquid has evaporated. This step gets the edges crispy and resembles the authentic style carnitas which is usually fried in lard. 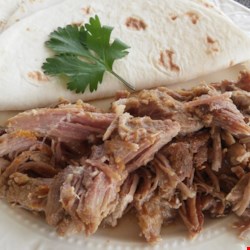