I debated trying these for a long time before I finally did it. I was almost positive they were going to be too weird for us! I give this a 4 instead of a 5 because I made half with black beans and half with kidney beans and the black beans were much better! Also, mashing the beans after they're in the skillet is a real pain. Next time I'll mash them first. I was worried that it was going to be too much cumin and chili powder, but used all the spices just as the recipe suggested and it was the perfect contrast against the subtle sweetness of the potatoes. Next time I'll use a little more cheese in each burrito. Served with sour cream. 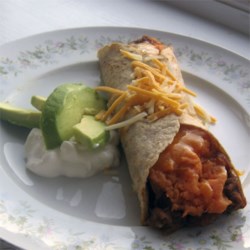