Like three earlier reviewers, I thought the filling was great but would skip the tomatoes entirely. Incidentally, I had a lot of extra filling -- this would've probably filled eight tomatoes. (This doesn't matter to me as I'll skip the tomatoes in the future.) Filling: Since some reviewers suggested adding nuts, instead of plain couscous I used Near East brand toasted pine nut couscous mix. For lack of ingredients, I used goat cheese instead of mozzarella. This turned out fine in small quantities. Since I'm not that great a cheese fan, I may skip it entirely next time. I also left out the mint. I'm glad I didn't leave out the basil -- I felt it added a lot to the recipe. Tomatoes: The tomatoes don't acquire the spicing of the couscous and end up dragging down the dish with their blandness. In addition, they made the couscous soggy -yes, I drained the tomatoes as the recipe suggested-, making the couscous less pleasant to eat. If, however, you insist on using the tomatoes, I suggest you cut them in half horizontally. I made the mistake of cutting a small hole in the top, and emptyed the insides and filled the tomato through that hole. This was bad because as the tomatoes expanded during baking, the skin wrinkled and shrunk, causing some tomatoes to split. (One of my uploaded pictures shows this.) 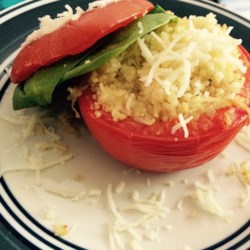