"The best vegetarian food I have EVER tasted"..."A meat lover's perfect non-meat meal"... those were some of the wonderful things my boyfriend was saying as he was eating his. He was almost in shock at how great they were (he's a carnivore at heart). I thought they were spectacular as well... and being a vegetarian myself, I was able to appreciate them even more. I made a few alterations to the recipe though... my favorite alteration was using a red pepper instead of a green pepper. I think it added just a tiny bit of sweetness to an otherwise super-spicy dish. It also livened it up with more red color. I left out the celery because I didn't have any, but truthfully, I think it wouldn't have been as good with it. Since I didn't have any diced tomatoes, I added 2, 8oz cans of tomato sauce (which I think was a wonderful substitution). I also followed previous suggestions not to put in so much chili powder, so I put in 1 1/2 teaspoons instead of 1 1/2 tablespoons. This was absolutely the right decision. Even a drop more chili powder and it would have been way too spicy. The best part was that my boyfriend was complaining when he was done that he was too full. That is by far the biggest compliment of them all, because he's rarely full after eating a vegetarian meal. This is DEFINITELY becoming a staple in my diet. I couldn't be more pleased. 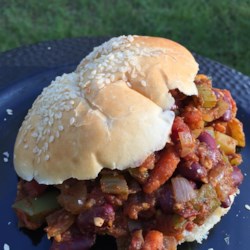