I have made this twice, the first time exactly as written, and it was a little too salty. The second time I followed the others' reviews and used ketchup instead of tomato paste, as well as water instead of vegetable broth. This turned a so-so recipe into an amazing recipe. This will become a staple in my house. One note: be sure to let the loaf cool for a while before trying to remove it from the pan...the first time I removed it too soon and fell apart. The second time I let it cool for a while and it held together nicely. Adding another egg might solve this problem too if you're not going to have time to let it cool, but I haven't tried it. 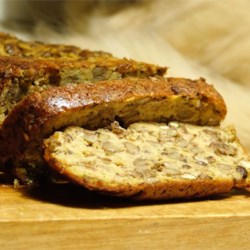