I made this into a 10 star dinner! Never had rabbit before, but it was just so delicious. It was mostly the sauce that did it. I first fried up 1/4 lb. of bacon and used the drippings to brown the floured rabbit in, then put the bacon crumbled up into the sauce. I added 1 c dry white wine instead of water. I added 1 tsp. of dried thyme and 1 tsp. dried rosemary. Also cut up 1 med onion and added to the carrots and potatoes. I used all the called for ingredients and just made these extra additions. So I did alter the recipe a bit, but it really was a dish to remember. Next time, I'll try it with chicken parts so my husband will eat it! 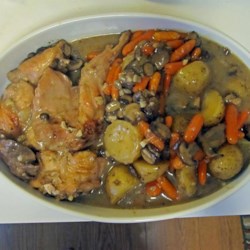