Super yum! BAsed on what others said, I used 1 box Stove Top stuffing on the bottom by soaking the bread stuff and forming into a thin crust. I then put it under the broiler for 2 minutes to firm & crisp. No beer either, used drippings from the beef and beef broth, as suggested also. Due to the Stuffing, I lessened all spices, especially salt. I know I tweeked it a bit, but this recipe is AWESOME. 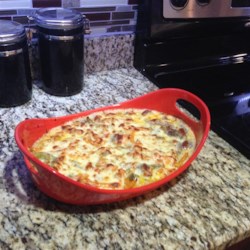