I made this as written but used apple cider instead of water. I added walnuts as suggested by another reviewer and a pinch of cayenne. I wasn't thrilled with the result that day, or even a few days later but a week or so later I ate this with brie and crackers and it mellowed out and blended wonderfully! I canned this using 8 oz jelly jars and a boiling water bath with a processing time of 10 minutes (per the Ball canning recommendations for a similar cranberry chutney recipe). The chopped apple loses some of its texture after canning but the recipe as a whole remains wonderful. 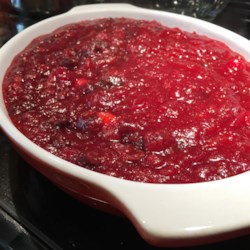