This cheesecake tasted just like the pumpkin cheesecake we used to serve at a 5 star restaurant in washington d.c. years ago. Their head pastry chef made it every fall to run through the holidays. I did have to make a few changes to make this recipe more of a creamy cheesecake that most people are used to. I used 3 8oz packages of cream cheese instead of 2, added 1/2 cup of sour cream (Fold the sour cream in after adding the eggs), and increased the pumpkin puree to 1 8oz can. I also had to adjust the spices a bit for my taste (added 1 tbls of spiced rum to the pumpkin mixture and a bit more nutmeg and cinnamon). I baked this in a water bath at 350 for 1 hr (till the middle jiggles like jello), then turn off the oven, prop the door open and let the cheesecake sit for another hour, I promise you it will not crack at all. I used a 10in springform pan and a shortbread cookie crust. I used one of the caramel sauce recipes from this web site and poured it over the cheesecake to give it a caramel glaze like the one at the restaurant had. It was fabulous!!! I took it to work, went to answer the phone, came back 10 minutes later and the whole cheesecake was gone!!! I couldn't believe it!! Now I have to make another one so my boyfriend can get a piece. Thanks for sharing such a great recipe!!!!!!!! 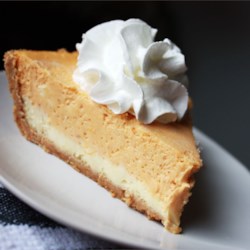