We had an early Thanksgiving feast this year with family and at the last minute, my sister, who was supposed to bring the turkey, went to the hospital and I told her not to worry about a thing. I have never cooked a turkey before and had no idea what I was doing! I looked up "turkey" on this site and found this recipe. I read some reviews and decided this was it. I had a 23 pound turkey so I doubled the recipe and threw it in the roaster while it was still a bit frozen. This was at 9:00pm the night before the feast. Then I forgot about it, didn't even have time to baste it at all the next day. We didn't wind up eating until after 1:00. About 10 minutes before we ate, I took the tin foil off and prayed it was good. Not only was it good, it was juicy and fell off the bone!!! I think I should also say that when I read the recipe, I thought you had to cut the skin to get the butter on the meat itself, but my husband pointed out that the recipe did not say to "cut" the skin. He got under the skin and pulled it from the meat really easily and I think that's what you're supposed to do. I didn't know that, since this was my very first turkey. My family requested that I "volunteer" to do the turkey from now on. Thanks so much for posting this recipe! Now I know how to cook a moist, delicious turkey! 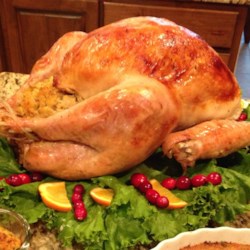