Yummy! I was initially skeptical because I though the broth might lack flavour. It was really good! I only had 1/2 chicken broth and the other half vegetable. Omitted the onion because I had none. Still delicious. My tip is to drop the meatballs into the soup slowly, going around the pot so they don't all sit on top of each other. The meatballs will rise to the top as they cook. Once most of the meatballs have risen (about 4 minutes), then stir gently. Don't stir when you initially put the meatballs in. Great recipe Lalena. Thanks so much! 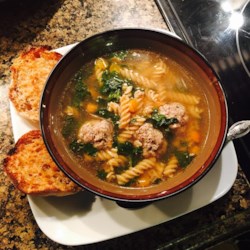