I modified this recipe quite a bit to fit with the ingredients I had on hand and to make it slightly lower in fat, but I still got superb results. I doubled the recipe, and in place of the carrots, I added one large can of corn. I used half butter and half olive oil instead of all margarine. I replaced the whole milk with skim milk and a small can of part-skim evaporated milk. I also left out the mustard powder, allspice, seasoning salt, cayenne pepper, and chicken boullion, replaced the celery seed with celery salt, and added some freshly ground pepper. One might argue that what I made is a completely different recipe, but this existing recipe made a great jumping-off point, and the resulting soup (or chowder, as I would call it) was still very flavorful. It would make a fantastic chowder to which to add haddock or another fish for a flavorful fish chowder. Another reviewer mentioned that this was a very thick soup - in doubling the recipe, I used a little less than twice the amount of flour called for, and the skim milk also thinned it a bit. I also cooked it for a little less than the recommended amount of time in order to keep the potatos firm, and didn't break them up with my spoon. Overall, a fantastic chowder! 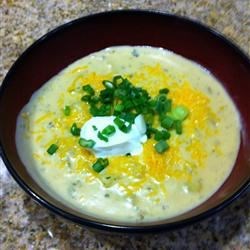