This is by far the best pea soup I've ever had, though I made some changes. I used 1/2 lb bacon instead of hamhocks (since I had it in my freezer already), frying the bacon in the stockpot, disposing of 1/3 the grease and reserving the crispy bacon for garnish later. After the grease was cool, I added the rest of the ingredients. I did take the bay out after 1/2 hour of simmering (afraid of too strong a taste) and reduced the amount of milk at the end as I thought this soup was too thin for my taste. I doubled the simmer time and it turned out just thick enough. I will use this recipe from now on! 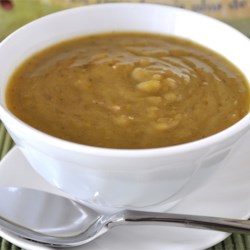