I did the Slow Cooker version, as suggested in other reviews. I used 1 small onion chopped and 2 Bay Leaves. Also used a smoked ham hock because I didn't have leftover ham w/bone. Put it all in the crock pot/slow cooker (except the oil, didn't need it) and cooked it on low all day (about 8-9 hrs). Then removed the bone and any fat from the ham hock, added another 15 oz. can of chicken broth because it was too thick and some more pepper (didn't use any salt because the ham or ham hock has enough) and served with hot rolls! IT WAS SOOOOO GOOD!!! My husband said he thought it was the best split pea soup he has ever had! Thanks for an EASY AND YUMMY SOUP! 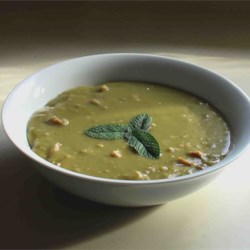 Split Pea and Ham Soup I