This soup had great flavor, but (I don't know what I did wrong...) I could not get a good consistency. I followed the recipe as directed and got the last instruction that said "simmer until peas are soft but NOT mushy." I had never made split pea soup before, so I did not expect that it would take 2 HOURS for the peas to get soft. The liquid kept evaporating so I added more water periodically (make sure you cover with a lid), but I was never quite sure what the "soft but not mushy" consistency was supposed to be. When I have eaten split pea soup before it was very smooth, but was this supposed to be a little chunky? I cooked until I thought the peas were done but was very frustrated by the unexpected length of time it took (we ate a late dinner last night). The taste was enjoyable and we liked the kielbasa sausage flavor, but we did not like the consistency of the soup. Perhaps I did something wrong, but I wanted to write this in case anyone else comes across this problem. 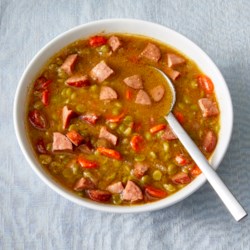