The flavor is OK but the consistency is that of a rice casserole. I thought two cups of rice was a lot. Maybe I did something wrong. (I don't think so.) I followed the recipe except that I didn't have any sage (but my dressing had a lot), and I forgot to add the peas. I didn't follow the methods as I didn't want to cook my fresh veggies for an hour and a half, which can render them essentially flavorless, not to mention mushy. I cooked the turkey bones and broth; removed the bones, strained the broth, then addeded the stuffing, veggies, and rice. Anyway, the idea of using stuffing and rice is a novel use of leftover stuffing and does taste good. If I try this recipe again, I would not use (canned) chicken broth due to the high sodium content, and because simmering the turkey bones is basically making stock anyway. 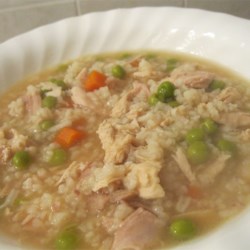