I'm giving this 4 stars, not because it wasn't good, but because I did make additions to it. I'm sure the basic recipe is very good just as written. I did not soak my bean, but put them in a pan with the chicken broth and brought it to a full, rolling boil and then transferred it to the slow cooker. The beans turned out tender and perfect. I also added 2 big sprigs of epazote, which is an herb traditionally cooked with black beans, as well as 2 bay leaves. Along with the other spices I tossed in 2 packets of Goya Sazon. The addition of a can of tomatoes w/green chiles as other suggested sounded like a good idea, so that went in too along with 2 boneless, thin-cut pork chops! I left it on med-high in the slow cooker overnight (about 15 hours total). I do not feel this soup was too thin. I only mashed some of the beans against the side of the kettle with the back of a spatula.I just had a big bowl with a dollop of crema....yum! 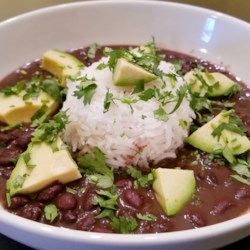