I had never made butternut squash soup before and I used this recipe as a starting point. I ended up making many alterations though, and I think they were definitely worth mention: - roasted the squash for 45 minutes, cut side up, with a light brushing of olive oil - used 1/2 a red onion, sauteed in *butter* then added 1/2 t marjoram, 1/4 t black pepper, 1/4 t cayenne, pinch of fresh ground nutmeg, and pinch of cinnamon, as well as four sage leaves - chopped up a honey crisp apple and added that with 3 c water + 2 T chicken stock - simmered this while the squash roasted - added squash when it was finished and simmered for maybe 15 minutes longer (take out sage leaves before pureeing) - pureed everything in a blender with only 8 oz cream cheese instead of 16 oz - left on heat for 15 minutes longer to marry the flavors - served with a dollop of cream cheese My boyfriend is a professional cook and he declared this to be the best butternut squash soup he's ever had! He even bragged about it to his coworkers the next day. The added cayenne gave it a bit more kick, which we really loved, and the apple added another layer of flavor. 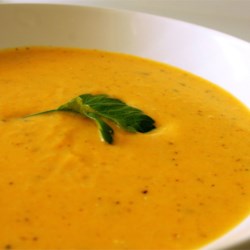