This soup has an excellent Indian flavor. Some friends walked into the house just after I started to boil the soup and they commented on the wonderful aroma that filled the house! I used brown lentils instead of red, I used red kidney beans instead of cannellini (which is white kidney beans), and I diced my own carrots, tomatoes, and celery. Fresh is always better than canned! I also used bagged beans instead of canned because of the higher nutritional value bagged beans have, so I had to let the soup cook longer (I made it around 8 AM and it was ready by 9 PM. I didn't have any cardamom so I used 3/4 teaspoon of ground cinnamon and 3/4 teaspoon of ground cloves. Garam masala is a spice combo of cinnamon, cloves, and black pepper, so you don't really need more garam masala... A great taste! 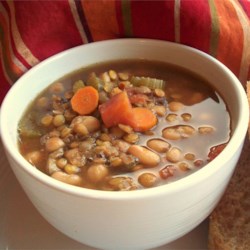