This recipe is so much fun to play with! I didn't measure anything. I beat an egg with a little salt, then added flour until it was a thick batter. Meanwhile I had just a bit of water boiling into which I threw in some tiny bits of leftover ham, a little diced onion, fresh ground pepper, garlic powder, parsley, and cumin (for the heck of it). Once the onion was tender I put the batter in there. I just dip a bit out with the tip of a spoon, then use another spoon to push it off into the boiling broth. The lumps about double in size, so only use a very small amount of batter for each lump. Once the lumps were pretty much done I lowered the heat and added some milk, real butter, and shredded cheddar cheese. I wish I had a bit of veggies to throw in for color but it tasted very good all the same. I gave this recipe four stars but my additions made it five stars. :-) Use your imagination with this recipe! 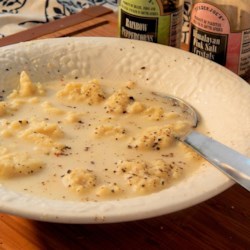