This is DELICIOUS. It looks unassuming but it has a bite to it. This recipe makes a ton, so be careful. I doubled the recipe so that I could have leftovers, but I would have had plenty of leftovers with the original. I made a few changes. I thinly sliced 8oz of bacon and cooked it in the soup pot with a little olive oil until crispy. I removed the bacon and set it aside. (Use it as a garnish later!) Then, I added the butter and the onions and celery. You could leave out the olive oil, but olive oil has a much higher burning point and adds some stability as well as some nice flavor. Other than that, I added two cups of diced carrots to the potatoes, subbed half of the milk with half-and-half, 1 can of corn and 2 cans of cream-style corn, and I used 1 cup Pepper Jack (instead of chiles or velveeta, yuck!) and 1 cup of Mex-mix cheese. I also added some shredded, cooked chicken in with the cheese. Be careful with the spices. I tasted it when I checked the potatoes and it was a little bland. The Jack will add the kick it needs, so don't worry. I used low sodium, low fat chicken broth because I cook for people with different preferences in saltiness. If you use low sodium broth, you WILL need to add salt. A few notes: Don't use the gravy that has 'sausage bits' unless you're using a slow-cooker-it takes them a while to reconstitute. This recipe freezes very nicely. Defrost in the fridge the day before eating. It separates some before it freezes so reheat it on the stove 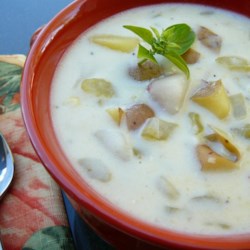