Very good recipe. We are an 'oyster stew' family, having it at least several times a month during the winter. Regarding this particular recipe: we like a smooth, milky broth, so after sauteing the celery and shallots, I whirled them around in the blender with a little of the milk. Also, because we eat so much oyster stew and think that much cream/half & half might blow us up like a piece of inflatable furniture, but still like the rich taste that plain milk doesn't give, we substitute canned evaporated milk for some or all of the cream/half & half. And when we serve it, we also put a selection of seasonings on the table so that folks can dust a little onto their soup, if they wish. Most popular are curry powder, cajun seasoning (Prudhomme or Emeril), smoked Spanish paprika, or my personal favorite, Tony Chachere's creole seasoning. And one last caveat. For those unaccustomed to using fresh oysters in a tub or jar, you're well-advised to first lift the oysters out of the liquid and set them aside. Then drain the liquid slowly, disturbing it as little as possible, and leaving a small amount in the bottom of the tub. There are ALWAYS small bits of sand or shell in there, and biting down on a piece of shell is no fun. In fact, my last tub actually had a pearl in it. Charming, but not worth a tooth. 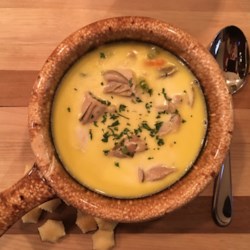