Okay..what did I do wrong? It was horrible and I was really disappointed after spending so much money on it. I used the canned Phillips crabmeat and I also omitted the fish but followed the recipe exactly. I think the Cheese did not go well with the seafood combination. May have been better with a wine sauce instead. I also used the bags of Med. Frozen Shrimp so maybe I should have used all FRESH seafood instead? 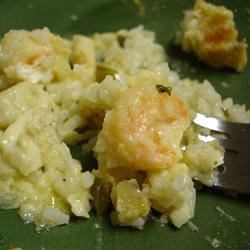