This is very good and similar to another way I like to cook salmon. The only thing I added was that I sprinkled a little dill on the fillet. Very good! Because I also used a thick fillet with the scales still on, I just made sure that I first cooked the "top" side and then flipped over to the scale side. It had to cook a little longer than I thought, and the scale side made quite a mess in the pan and started to burn just a little. The meal itself though was wonderful. When I usually make this I bake in the oven on about 325. I have to say the oven is easier and not as messy, but I liked the extra little crunch (for lack of a better word) that the top of the fillet had from cooking on the stove top. 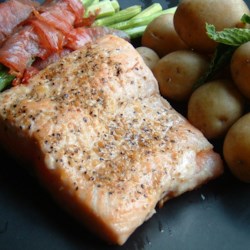