Awesome!!! The sauce was fantastic, restaurant-quality. Thanks Christine! My husband stated that he liked these better than the ones served at our favorite Italian restaurant. I left out the onion and the bay leaf, added extra garlic, used dried parsley in place of fresh. Also, I only had white zinfandel for the wine, so being that its pretty sweet, I only used 1 cup, otherwise I think it would have overpowered the sauce. I doubled the butter though, to compensate. Took others suggestions and added a shot of heavy cream at the end, which helped thicken the sauce a bit. Served with crusty bread and we mopped it up! Mmmm! Definitely cook the mussels in the sauce - like another reviewer said, if you don't, you will lose that mussel "liquor" which is released when they open, that really makes the sauce! No need to strain the sauce after, thats just extra work! Just take the mussels out, melt that extra butter, and pour the sauce over them! Yum! 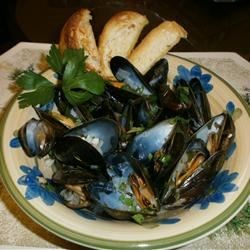