OK, you've probably read many reviews as to how delicious this pie is (and it really is!). What you've also read is the submitter forgot to list the cinnamon in the recipe or how you should forgo the lattice crust and a few other suggestions. Let me strongly suggest that you try this recipe unaltered at least once. The point is that this is a small twist on traditional apple pie, so no cinnamon (or nutmeg or cloves or raisins etc.). The lattice crust is essential because it lets you pour the caramel mixture over the top and it drains into the fresh apples underneath while leaving a thin coat on the lattice crust. It really isn't hard to do...there's even a short video of a teenager making a lattice crust pie for a dinner in honor of his mom's visiting friend. Check it out if you need some pointers. I also saw comments suggesting to use 6 apples instead of 8. Another suggestion I saw several times said to just put the pie in at 350 degrees for 1 hour and it's fine. I would say if you are using an 8" pie dish, sure, reduce it down to 6 apples but for a 9" dish, 8 apples was just right (I could have probably squeezed in one more). I would also strongly suggest following the baking instructions because the higher temperature helps set the bottom of the crust. With fresh fruit pies, there is a chance the crust will not fully bake in the center as the fruit releases liquid. The high temperatures "temper" the crust during the first 15 minutes of baking. Finally, 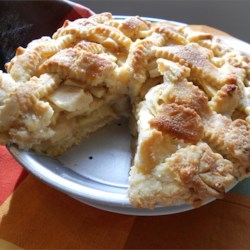