Absolutely FABULOUS! My 80 yr. old neighbor accross the street grows zucchini every year because his wife likes them. He will not eat zucchini in any form--ends up giving most of the zucchini to neighbors. I took some of this cobbler to them, and just told them it was a delicious cobbler--then told him to tell me what kind of cobbler it was. Of course he said "Apple". When I told him it was zucchini, he wouln't believe me. I had to go accross the street and bring the recipe to show him. His wife now has the recipe, and he might eventually try zucchini in other tasty dishes. A real hit with everybody who has tried it. Thanks Beverly for sharing this delicious recipe. Gordon 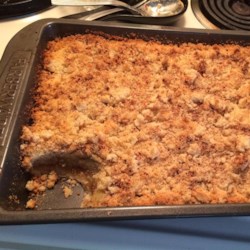