This came out tasting great. I did modify it a bit. I used a teaspoon of instant coffee dissolved in a tablespoon of water and then added the eggs. I used a ready-made pie crust and pre-baked as directed. After following the directions carefully, it was still rather runny so I added another 1/4 cup at least of cocoa and also about a 1/4 cup of cornstarch and beat those in well in the mixer. I also sprinkled the top with some sea salt just because I wanted to. Then I thought I was turning down the heat from 400 degrees to 350 degrees after the first 10 minutes but accidentally changed the timer instead. About 20 minutes later I could smell the crust getting brown so I opened the oven to add a cover around the edge and realized what I had done. I could tell the pie was ready so I took it out and cooled it almost completely before slicing. It was just a little warm and stayed together very nicely and tasted very good. We ate it so fast that I was planning to add some whipped cream. Maybe next time because I'll make this again. 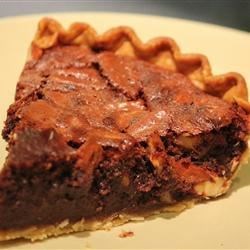