We made it just like the recipe says, and it was delicious, even though my little brother complained saying the butterscotch pudding tasted coffee-like. MAKE SURE YOU LET THE PUDDING SIT. I have made pudding before, and in a hurry I had not let it sit at all, I kept mixing continuously. Letting my pudding sit for two minutes while my mom lectured me on how to layer the pie right was the best food technique I've ever learned! It will actually thicken into pudding, instead of how liquidy it looks when you add the two cups of milk. I was also surprised when the crust tasted like brown sugar, though it didn't stick well to the cream-cheese mixture. 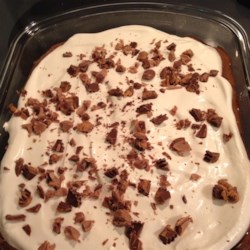