I made this recipe as written. The soy sauce flavor in the juice was overwhelming and it was too strong to just pour all over the meat ... it was more of a dipping-type sauce. The next time I'll cut the soy sauce down to 1/2 C and maybe add more honey. I served with white rice and broccoli. Not bad and worth trying again with some changes. UPDATE 3/13: Made again, kept soy sauce the same but added a cup of water. It cooked nicely but for some reason some of the meat was dry... I think that is more the cut of meat's fault rather than the recipe. The juice was delicious, so much so that my daughter asked me to save it so she could "drink it." Yuck. As good as it was I did not comply! 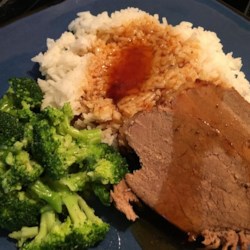