First, I have to admit that I changed somethings about this recipe. Not the least of which was the ground beef. We do not eat red meat, so I made this with ground turkey. When I browned the turkey, I added cumin and garlic salt - as some had suggested the flavor was bland. I did not have any greeen peppers, but I did have the diced tomatoes & green pepper canned so I used that. I also used a chili ready tomato sauce which had added seasonings. To give it a flavor boost, I added about a half teaspoon of crushed red pepper. The end result was pretty good. However, it seemed a little bit dry. The recipe called for one 8 oz can of tomato sauce and I used about 2/3 of a 15oz can. Next time I will use the whole can. One other somewhat important aspect was that the mixture filled my crockpot to the top and I had a tough time blending it all in because it was so full. It would probably be easier to mix it in something first and then add to the crock pot. Just a thought. 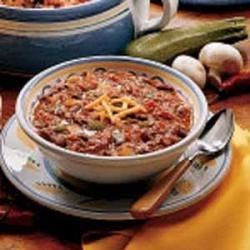